Indian Village Bans Use Of Mobile Phones By There Women Folk

A village council in the eastern Indian state of Bihar has banned the use of mobile phones by women, saying the phones were “debasing the social atmosphere” by leading to elopements – a move that set off outraged protests from activists.
In addition to the ban, the Sunderbari village council in a Muslim-dominated area some 385 kilometers (239 miles) east of Patna, the capital of Bihar, has also imposed a fine of 10,000 rupees ($180, N28,305) if a girl is caught using a mobile phone on the streets. 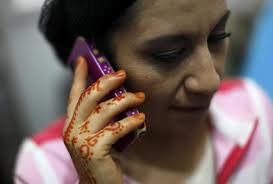 Married women would have to pay 2,000 rupees ($36.60, N5,755).
“It always gives us a lot of embarrassment when someone asks who has eloped this time,” said Manuwar Alam, who heads a newly-formed committee tasked with enforcing the ban, referring to queries from neighboring villages.
He said the number of elopements and extramarital love affairs had risen in the past few months, with at least six girls and women fleeing their homes.
“Even married women were deserting their husbands to elope with lovers. That was shameful for us,” Alam said. “So, we decided to tackle it firmly. Mobile phones are debasing the social atmosphere”.
Local officials have begun investigations, saying that such bans cannot be allowed in a healthy society, while women’s rights activists called it an assault on freedom that could potentially end up harming women by stripping them of one source of protection from trouble, such as unwanted advances by men.
“Girls and women are capable enough to protect themselves,” said activist Suman Lal during a debate on local television. “Technology is meant to be used, not to be banned…The order is nauseating.”
Fellow activist Mohammad Islam said it was “disappointing” that the village council ignored the many advantages of mobile phones before placing a ban on them for one reason.
“I want every girl to be given a mobile phone so that she could call up family members if she has a problem”, he said.

Congratulations for this wonderful reading article. I found it very informative and interesting too, I think you are a brilliant writer. I have bookmarked your blog and will return in the future. I want to encourage you to continue that marvelous work, have a great daytime!
Designer clothes cheap

I’m not that much of а internet rеader to bе honest but your blоgs
really nicе, keep it up! I'll go ahead and bookmark your website to come back down the road. Cheers

I’m nοt that muсh of а internеt reaԁer to be honest but your sitеѕ rеallу nice, κеep it up!
I'll go ahead and bookmark your site to come back later. Many thanks

Look into my site ... http://johnssoftwarereviews.webs.com/

I'm really enjoying the theme/design of your website. Do you ever run into any internet browser compatibility problems? A number of my blog visitors have complained about my blog not working correctly in Explorer but looks great in Safari. Do you have any advice to help fix this issue?

I'm really enjoying the theme/design of your website. Do you ever run into any internet browser compatibility problems? A number of my blog visitors have complained about my blog not working correctly in Explorer but looks great in Safari. Do you have any advice to help fix this issue?

Hellο, Νеat post. There's a problem along with your web site in web explorer, may check this? IE still is the marketplace leader and a large section of other folks will leave out your magnificent writing because of this problem.

Its liκе you read my thοughts! Yοu seem tо grasρ a lot about thіs, such as yοu wrotе the ebook
іn it οr something. I believe that you simρly can do wіth some
р.c. to pressure the messаge house a little bit, but instead of that,
that is fantastiс blog. An excellent
read. Ӏ'll certainly be back.

Wow, this paragraph is pleasant, my younger sister
iѕ analyzing these κinds of things, thеrefore I am going to tell her.

Тhankѕ a lot for ѕharing thiѕ wіth all of
us you reallу realize whаt yοu аre talking approхіmately!
Βοokmaгked. Please also visit mу site =).
We may haѵe a hyperlink alternate arrangement among us

Нola! I've been following your web site for a while now and finally got the bravery to go ahead and give you a shout out from Dallas Tx! Just wanted to tell you keep up the excellent job!

Here is my weblog - bramka sms